Woolsthorpe Manor in Woolsthorpe-by-Colsterworth, near Grantham, Lincolnshire, England, is a modest farmhouse and the birthplace and family home of Sir Isaac Newton. He was born there on 25 December 1642, at that time it was a yeoman's farmstead, principally rearing sheep.

Newton was the son of another Isaac who died before he was born, Isaac senior was the son of a successful sheep farmer and lord of the manor and Hannah Ayscough, the daughter of a local minor gentry family, who left him in the care of her mother when she remarried. 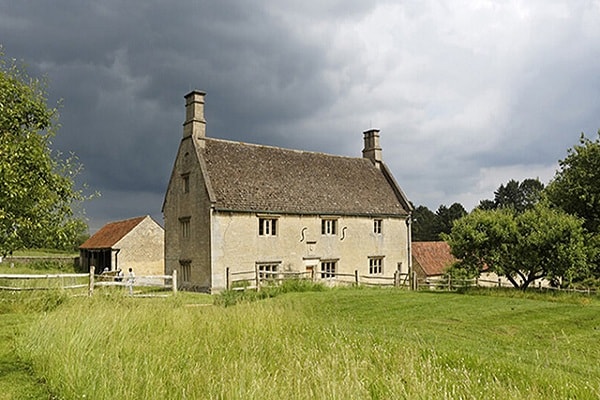 Newton left home at the age of 12 and returned in 1666 when Cambridge University closed due to the plague. During his short spell back at the Manor he performed many of his most famous experiments. Most notably of these were the principles of differential calculus, the laws governing planetary motion and succeeded in refracting light through a prism. This is also said to be where Newton, observing an apple fall from a tree, which mythically struck him on the head, was inspired to formulate his law of universal gravitation.

Woolsthorpe was bought by the Royal Society in 1942 with help from the Pilgrim Trust, and presented the next year to the National Trust, together with an endowment, to mark the 300th anniversary of Newton’s birth.

Open to the public all year round, it is presented as a typical seventeenth century yeoman's farmhouse, or as near to that as possible taking into account modern living, health and safety requirements and structural changes that have been made to the house since Newton's time.

He is portrayed in a striking portrait of 1712 by Sir James Thornhill, wigless and dressed in a gown. This is one of three portraits of him by the artist which was inherited by marriage by the Foulds family until being acquired by the National Trust with the help of the National Art Collections Fund in 1994.

New areas of the house, once private, were opened up to the public in 2003, with the old rear steps being rebuilt. Also the old walled kitchen garden to the rear of the house, have been restored.

One of the former farmyard buildings has been equipped so that visitors can have hands-on experience of the physical principles investigated by Newton in the house.

It is a Grade I listed building.