Woodthorpe is a suburban area of Arnold, Nottinghamshire. It is part of the Borough of Gedling and lies next to the city boundary. It is next to the areas of Mapperley, Daybrook, Sherwood and the main Arnold area.

Woodthorpe Grange Park is a reminder of the days when the Nottingham Suburban Railway ran through the park via the Ashwell Tunnel. The railway was opened in 1889 and was built to serve the brickworks of Mapperley and Thorneywood but passenger trains were also run. 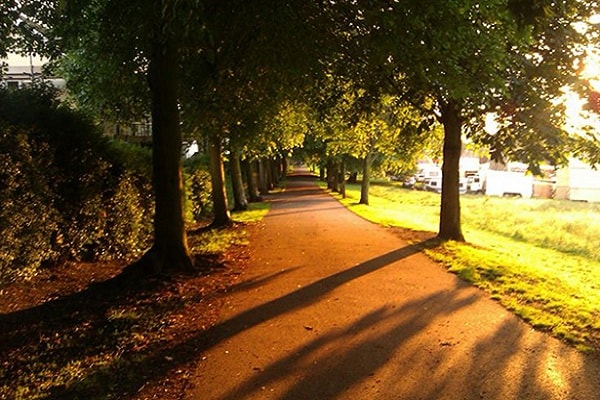 By 1901 passenger services were past their heyday with competition from the start of electric tram service into Nottingham and ceasing completely thirty years later. The brickworks traffic continued until 1951 when the line was finally closed.

The park is inside the city boundary (which is the southern edge of Woodthorpe Drive at this point). It is one of the largest suburban parks in Nottingham and facilities include a tropical plant house, plant nursery, landscaped gardens with water features, several football pitches, a children’s play area and an 18 hole pitch and putt course. The park has a Green Flag Award and is nominated for the next year.

It was originally forested grazing land, mainly used for pig farming. Woodthorpe Grange was built in 1874 as the family home of Henry Ashwell.

In 1889, the Nottingham Suburban Railway was built, running north to south across and under the estate. Although he was compensated, Ashwell didn't like this and sold the grange to Edward Parry, who coincidentally designed the railway that split the estate.

The NSR was built mainly for the brickworks of Mapperley and Thornywood; however, there were passenger services to Daybrook and Sherwood Station.

In 1905, Parry sold the estate to Godfrey Small, a Nottingham city councillor. Meanwhile, the railway was struggling with the opening of the electric tram from Nottingham City Centre to Sherwood. During World War I, services were severely curtailed and Sherwood Station closed.

In 1921, Small sold the house to Nottingham City Council for £15,000 (funded by a donation from Sir Jesse Boot). It opened to the public as Woodthorpe Grange Park in 1922.

On 10 July 1928 King George V and Queen Mary visited the park and 17,000 schoolchildren travelled to the event on the NSR to Sherwood Station (which had been re-opened for the event).

Passenger services were completely stopped in 1931.

The line opened once more for an enthusiasts’ special in 1951; a little while afterward the goods service ended and the track was lifted.

The house is now the location of the city’s Department of Leisure and Community Services and is a Grade II listed building.

Go to the Woodthorpe Grange Park website for more...