Newstead Abbey, in Nottinghamshire, England, was formerly an Augustinian priory and converted to a domestic home following the Dissolution of the Monasteries. It is now best known as the ancestral home of Lord Byron.

The priory of St. Mary of Newstead was founded by King Henry II of England about the year 1170, as a penance following the murder of Thomas Becket. Newstead was never an abbey; it was a priory.

In the late 13th century, the priory was rebuilt and extended. It was extended again in the 15th-century.

Despite the clear annual value of Newstead being below the assigned limit for the suppression of the lesser monasteries, it was only by payment to the Crown of a heavy fine in 1537, this priory obtained the privilege of exemption. 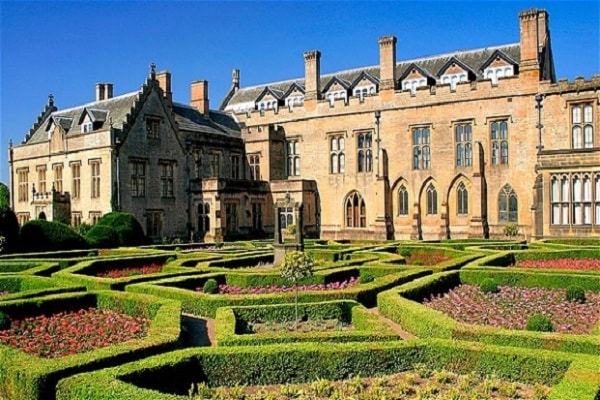 The lake was dredged in the late eighteenth century, and the lectern thrown into the Abbey fishpond to save it during the Dissolution of the Monasteries, was discovered and in 1805 given to Southwell Minster where it still resides.

Sir John Byron of Colwick in Nottinghamshire was granted Newstead Abbey by Henry VIII on 26 May 1540 and started its conversion into a country house. His son Sir John Byron made many additions to the original building.

It then passed to John Byron, an MP and Royalist commander. He died childless in France and ownership transferred to his brother Richard Byron.

The 5th baron, known as "the Wicked Lord", was eccentric and violent and ruined the estate. His son and heir (also named William) eloped with his cousin Juliana Byron. This enraged the Lord who wanted his son to marry well to escape the debt that had been incurred in the Byron name. When defied by his son, he purposely went about ruining his fortune so that, in the event of his death, his son would receive nothing but debt and worthless property.

His vicious plan, however, was thwarted when his son died in 1776. William also outlived his grandson, a young man who, at the age of twenty-two, was killed by cannon fire in 1794 while fighting in Corsica. The 5th Lord died on 21 May 1798, at the age of seventy-nine.

The title and Newstead Abbey was then left to his great-nephew, George Gordon, the famous poet, who became the 6th Baron Byron.

The young Lord Byron soon arrived at Newstead and was greatly impressed by the estate. The scale of which contributed to Byron's extravagant taste and sense of his own importance. However, no less impressive was the scale of problems at Newstead, where the yearly income had dwindled and many repairs were needed.

He and his mother moved to Nottingham and neither lived permanently at Newstead for any extended period. His view of the decayed Newstead became one of the romantic ruins, a metaphor for his family's fall.

From January 1803 the estate was leased to the 23-year-old Henry Edward Yelverton (Lord Grey) for five years until Byron came of age.

In 1808 Byron returned to live at Newstead and began extensive and expensive renovations. His works were mainly decorative, rather than structural, so the rain and damp obscured his changes within just a few years.

Byron’s beloved Newfoundland dog named Boatswain was buried at Newstead Abbey and has a monument larger than his master's.

He was determined to stay at Newstead and hoped to raise a mortgage on the property, despite being urged to sell. Byron left for his Mediterranean travels in 1809 and upon returning to England in 1811, stayed in London, not returning to Newstead until after his mother died which left him filled with remorse due to his negligence of her.

For the next few years, Byron made several attempts to sell the Abbey. It was put up for auction in 1812 but failed to reach a satisfactory price. A buyer was found, however, but the buyer Thomas Claughton, failed to pay the agreed price and the sale fell through. Byron’s financial situation was now serious and he proposed marriage to the heiress Anne Isabella Milbanke.

In July 1815, Newstead was up for auction again but failed to reach its reserve. It was only during Byron's exile in Italy, in 1818, that a buyer was found, Thomas Wildman who had been at Harrow School with Byron.

Wildman spent a great deal of money on the Abbey and its contents, restoring it to some greatness. The architect, John Shaw Sr., designed new extensions to the abbey.

In 1861, William Frederick Webb, an African explorer, bought the Abbey from Wildman's widow. Under Webb, the chapel was redecorated, but the rest of the house remained largely unaltered.

After his death in 1899, the estate passed to each of his surviving children and finally to his grandson Charles Ian Fraser. Fraser sold Newstead to a local philanthropist, Sir Julien Cahn, who presented it to Nottingham Corporation in 1931.

Go to the Newstead Abbey Historic House and Gardens website for more...