The National Ice Centre (NIC) is located in Nottingham, England. It is situated just east of the city centre, close to the historic Lace Market area.

The NIC was the first twin Olympic-sized (60m x 30m) ice pad facility in the UK. Incorporating the Nottingham Arena (since January 2016 re-branded as the Motorpoint Arena Nottingham), the NIC is a combined live entertainment and leisure venue. 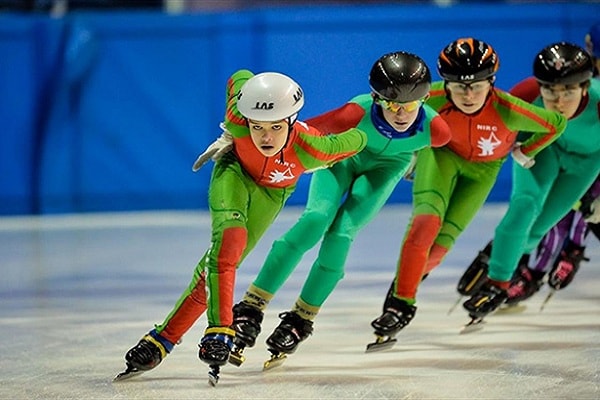 The National Ice Centre was constructed on the site of the former Nottingham Ice Stadium, which opened in 1939 and was showing its age. Plans to replace the stadium were first announced in September 1995.

The estimated cost of replacement was £13 million, part of which was to come from National Lottery funds. The plans were unveiled in October 1996, by which time the British Olympic Association were in support of the proposal.

Several buildings were demolished to make way for the new ice centre; this included an Art Deco warehouse and "The Old Cricket Players" pub, which was initially planned to be spared.

The former Ice Stadium closed in March 2000. This had been the former training ground for Olympic ice dancing champions Torvill and Dean (Jayne Torvill and Christopher Dean). The square in front of the new building was named 'Bolero Square' to honour their achievements.

During excavation for the new building in July 1998, a rare 1,100-year-old Saxon jug was found, which is on display at the Nottingham Castle Museum. A 19th-century graveyard was also found under the car park, from which the bodies were then exhumed.

The second phase of the project – The Olympic Rink was the second Olympic-sized ice pad to be opened (also known as the 'family rink') opened ahead of schedule, on 7 April 2001.

The Arena doubles as an Olympic-sized ice rink and a concert venue, in which case the ice is boarded over and the seating and staging are converted to suit the event.

The'family rink' is where the public ice skating sessions and fun family events are accommodated.

Incorporating these two ice pads, the NIC is used for a range of ice sports activities: ice hockey, figure skating, ice dancing, speed skating and synchronized skating. As well as encouraging absolute beginners to participate in these ice sports, there are many elite ice skaters training at the NIC.

The Arena is home to the Nottingham Panthers ice hockey team. Founded in 1946, it was disbanded in 1960 and reformed 20 years later.

The Panthers have won eight Challenge Cup finals in the Elite Ice Hockey League (EIHL) since its formation in 2003.

In January 2017, the Nottingham Panthers became the first British ice hockey team to win a European trophy in the Continental Cup. This in turn led to qualification in Europe's Champions Hockey League in 2017, where they reached the last 16.

The 2017 triple ISU World Champion, Elise Christie, is a member of the GB Short Track Speed Skating Squad. Elise broke the 500m short track speed skating world record on 13 November 2016 in Salt Lake City, USA. This achievement has been recognised by the NIC through the unveiling of a venue banner describing her as the "fastest woman on ice".

The award-winning TV documentary series, Ice Stars, was filmed at the National Ice Centre. Commissioned by CBBC, this series showcased the various disciplines of a group of young ice skaters at the NIC.The NIC has invested time and resources to support the production of Ice Stars in a bid to revive interest in ice skating around the UK.

The National Ice Centre is an Industry Green accredited venue, committed to significantly reducing energy consumption. The facility takes into consideration the energy usage and the behaviour and activities of all staff, contractors and customers that visit the venue.

The environmental impact is managed in terms of: consumption of electricity, water, heat, gas and other resources; production and disposal of waste and pollution; and atmosphere emissions from travel associated with the business.

On Saturday 22 April 2017, the NIC participated in Earth Day 2017. On this day "the NIC generated all its energy from the sun for one hour via solar.

Go to the National Ice Centre website for more...