Mansfield Museum is a local authority museum run by Mansfield District Council in Nottinghamshire. The brainchild of William Edward Baily, a wealthy local collector and natural historian, the museum opened in 1904 after Baily offered his collection and a building, the 'Tin Tabernacle', to Mansfield.

Originally called the "Tin Tabernacle", the Museum was given to the town of Mansfield by the wealthy collector and natural historian,William Edward Baily in 1903. On his death he donated his collection and the building to house it. 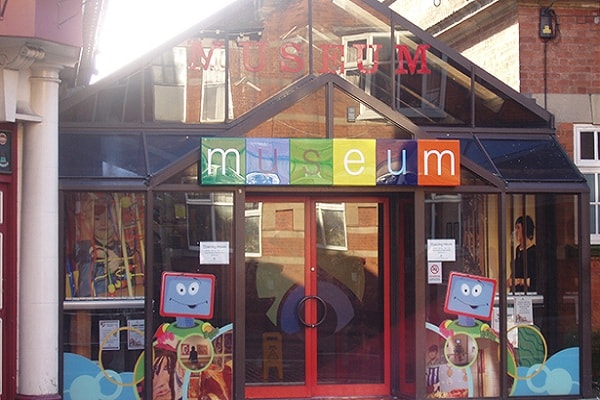 The following year the Museum was opened to the public on its current site on Leeming Street. Other prominent local people also added to the collection, including naturalist Joseph Whitaker and artist Albert Sorby Buxton.

The building you see today replaced the deteriorating "Tin Tabernacle" in 1938 and a fourth gallery was added in the 1960s.

The arcade gallery was opened by HRH The Duchess of York in 1989 and this finally took the building out onto the road.

The most recent addition to the Museum has been the XplorActive hands-on environmental gallery.

As well as the many permanent and temporary exhibitions the Museum hosts a number of community projects, these are aimed at all sections of society.

In 2011 the Museum was recognised as The Guardian Family Friendly Museum of the Year.

The Museum is focused on working with groups across the community and providing a child-friendly atmosphere to encourage visits by younger people and their carers.

Changing exhibitions aimed at all sectors of local society aim to keep the Museum a relevant player in Mansfield's cultural life.

The museum provides a range of educational activities, including the XplorActive exhibition and ArtBeat, a holiday workshop for children.

The Museum's permanent displays illustrate the social and industrial history of the district using objects and photographs.

A significant collection of eighteenth century porcelain, including pieces from Derby, Pinxton and Mansfield is always on show, and a collection of Albert Sorby Buxton's watercolours takes visitors back to Mansfield at the turn of the century.

A real jewel in the crown of the collection are the watercolour pictures of Mansfield painted by artist Albert Sorby Buxton. The pictures highlight buildings in Mansfield that no longer exist and views that have long since disappeared.

A gallery is dedicated to the ceramic works of William Billingsley and Rachel Manner's lustreware.