The Mill was built shortly after 1807 by the father of 19th-century mathematical physicist George Green, whose name was also George Green.

It is located on the site of a previous post mill and there were at least two other mills on Windmill Lane in Sneinton. In 1829 the elder Green died and his son inherited the mill and operated it until his death in 1841. 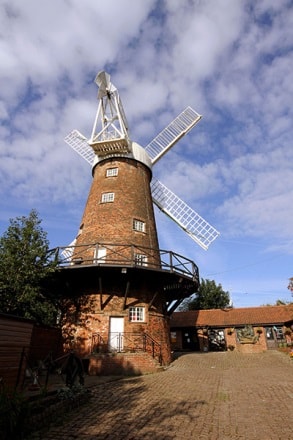 George Green was 14 years old when his father built the windmill and for most of the rest of his life George worked in the windmill.

But George Green was also a brilliant mathematician and physicist. He devised new ways of doing mathematics which he used to make many discoveries about such things as electricity, magnetism, light, sound and wave motion.

His mathematics – still called Green’s Theorem and Green’s function – are used today by scientists and engineers all over the world working with computers, lasers, satellite communications. Research scientists trying to understand the gravitational field of the Earth and sub-atomic particles, for example, use his mathematics.

Remarkably George Green had only 14 months at school, leaving when he was only ten years old to work in his father’s bakery and later in the windmill.

In 1828 this self-taught genius published his greatest scientific work where he devised a completely new way of using mathematics to understand electricity and magnetism.

Five years later he became a student at Caius College in Cambridge; he was forty years old. After taking his degree in mathematics he became a Fellow of the college where he did more research and published more scientific papers.

But his health failed and returned to Nottingham, to his partner Jane Green and their seven children. He died in 1841 at the age of only 47 years. He is buried at St Stephen’s church, almost within the shadow of his windmill.

In 1993, the bicentenary of his birth, George Green achieved the honour he so richly deserved when a memorial plaque was dedicated in Westminster Abbey.

The mill was still in use until the 1860s, after which it was abandoned and gradually fell into disrepair. In 1923 a copper cap was fitted at the top to make the building watertight and this survived until a fire destroyed it in 1947.

The mill was derelict until it was acquired by Nottingham City Council in 1979. Funds were raised and it was renovated by Thompson's, millwrights of Alford, Lincolnshire between 1984 and 1986. It is a Grade 2 listed building. It was reopened on 2 December 1986 and is now part of a science centre which is open to the public. At the same time, No 3, Green's Gardens was restored from near dereliction by the Nottingham Buildings Preservations Trust as a residence for one of the Museum staff.

Green's windmill appeared in an episode of Boon titled The Eyes of Texas which was filmed in 1989.

Go to the Green's Mill and Science Museum website for more...