The construction of the Sleaford Navigation linked the town with the navigable waters of the River Witham and so with the expanding canal network.

In an era when navigable waterways were at the forefront of the transport revolution and provided a way of transporting bulk goods economically for the first time, it promised (and for a time delivered) a sudden rise in Sleaford’s importance. 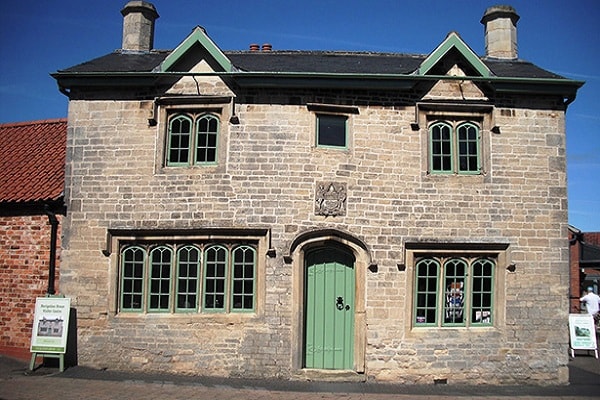 It no longer mattered that the raw materials of industry were not to hand, because the facility to transport them and to deliver the finished product was.

To bring the plan to fruition proved a long and difficult business as large sections of the Slea had to be straightened and scoured out and the whole project required a considerable investment and the passing of an authorising Act of Parliament.

Plans were produced as early as 1773 but it was only after the financial backing from Peacock and Handley, Sleaford’s first banking house,that the project finally went ahead.

The project engineers were William Jessop and John Hudson, who had considerable experience of canal building. Jessop was also a business partner of Handley’s brother, William, who ran a cotton mill at Newark (and who was already enjoying the advantages of the navigable River Trent).

By the 1830s the Navigation Yard site had been developed by the Company of the Proprietors of the Sleaford Navigation and included a warehouse, a one storey building of brick walls and a wood-beam interior, built between 1790 and 1792 (and now completely refurbished using the original bricks and timber beams).

As the years went by and the prosperity of the Navigation grew, it was felt by the ‘committee’ that there was a need to provide a weighing machine and ’shed’ to house it. Following various meetings, over a period of several months, the decision was made to provide an office and dwelling house.

The building was finished in time for the committee meeting of the 7 May 1839. Also noted was the purchase from Cort, the manufacturer, of the weighing machine.

Note the stook of corn, which was one of the main charges on the Navigation Company’s coat of arms, over the front door of Navigation House.

In the event the boom in trade and industry was short-lived. The age of canals lasted only into the early decades of the 19th Century – railways superseding them. In the case of Sleaford, the arrival of the Boston, Sleaford and Midland Counties Railway in 1857 led to an inexorable decline in canal revenue.

The Navigation company continued to use the building until the company was wound up in the ‘Sleaford Navigation Abandonment Act, 1878’ and was subsequently used as a dwelling house where Sarah Elizabeth Mettam was born (in the same year) and lived for the remainder of her life.

The premises were bought by seed merchants Messrs. Hubbard and Phillips, who operated in the 1890s, together with the rest of Navigation Wharf.

The House, which has a Grade II listing, eventually fell into disrepair, with severe subsidence caused by the removal of the weighbridge resulting in severe damage to the front elevation of the building.

It was eventually rescued and has been completely restored and repaired by North Kesteven District Council with funding assistance from The Heritage Lottery Fund, European Regional Development Fund, and The East Midlands Development Agency.

The house itself stands as a reminder of the way trade has developed over the years and has a heritage theme covering the early development and build of ‘The New River Slea’, products delivered and transported and the craft involved, the way the House functioned and areas where ‘The Navigation’ played a significant part in Sleaford’s history.

It is thought to be the only original canal office still in existence in the country.