Grantham House is a handsome town house, built in 1380, one of the oldest buildings in Grantham, Lincolnshire, England. It has a riverside walled garden. 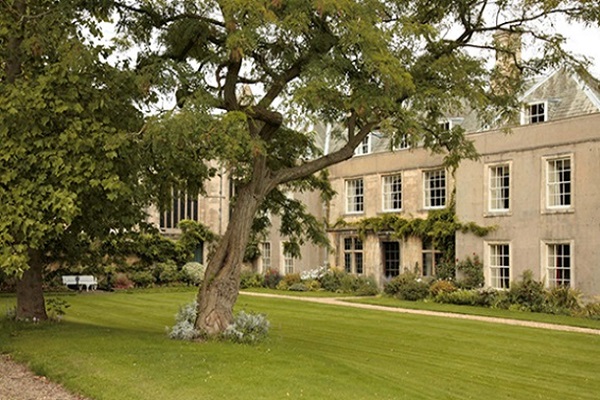 The House is situated in Castlegate and its architectural features have been enhanced and remodelled several times over the centuries and include a 16th-century chimney stack, 17th century windows and an 18th-century staircase. The House and the Stables are both Grade I listed buildings and the Wall and Doorway for the riverside garden is Grade II* listed. The property is also reputed to haunted by several former residents.

It was originally known as Hall Place, after the eponymous family of wealthy wool merchants who lived there from the end of the fifteenth century until the beginning of the seventeenth century.

Henry VII’s daughter Princess Margaret lodged at Hall Place in 1503 on her way up the Great North Road to Scotland, following her marriage by proxy to James IV, as did Cardinal Wolsey on his last journey north.

After Arthur Hall (1539–1605), MP for Grantham in 1571, died in penury, it subsequently belonged to the Skipwiths and then the Seckers.

It was then acquired by Sir Richard Cust (1680–1734), 2nd Baronet of Pinchbeck. In the year of his death, the house became the dower-house of his widow, née Anne Brownlow, until she inherited Belton House on the death of her brother, Viscount Tyrconnel, in 1754.

In 1884 Mrs Sedgwick, née Emma Hutchinson (1857–1936),  became a tenant and in 1921 it was bought by her brother, James Hutchinson who was Earl Brownlow’s agent.He bequeathed it to her three years later.

Mrs Sedgwick left it to her daughters, Miss Winifred and Miss Marion Sedgwick, who gave it and its contents to the National Trust between 1944 and 1950, along with 20 acres, thus preserving an important green space in the centre of the town, known as 'Sedgwick Meadows'.