Rufford Abbey is a country estate in Rufford, Nottinghamshire, England, some 2 miles (4 km) south of Ollerton.

Originally a Cistercian abbey, it was converted to a country house in the 16th century after the Dissolution of the Monasteries. 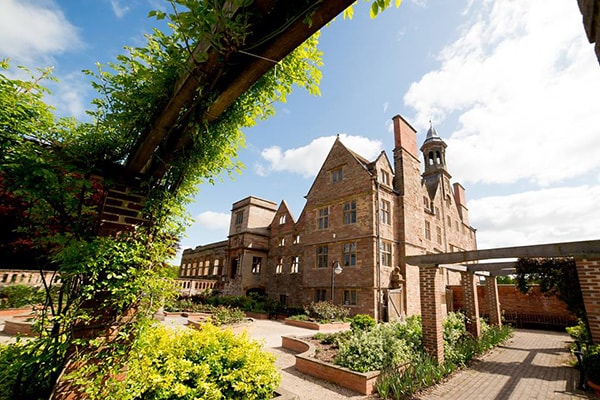 The Abbey itself was founded by Gilbert de Gant, on 12 July 1147, and populated with Cistercian monks from Rievaulx Abbey in Yorkshire.

The English Pope, Adrian IV gave the blessing for the abbey in 1156, following which the abbey's lands expanded and the villagers of Cratley, Grimston and Rufford, Inkersall were evicted. A new village of Wellow, just outside the estate housed some of the displaced people.

The Abbey was included in Henry VIII’s Dissolution of the Monasteries in 1536 among the lesser monasteries.

After its dissolution, the abbey gained a reputation of being haunted by the spectre of a giant monk carrying a skull.

The estate was granted to George Talbot, 4th Earl of Shrewsbury. It was partly demolished and converted to a country house between 1560 and 1590 two generations later.

The estate was inherited in 1626 by Mary Talbot, sister of the 7th and 8th Earls, from whom it passed to her husband, Sir George Savile. He remodelled the house in 1685–95.

Sir William Savile, George's successor, made Rufford Abbey the seat of the Savile family after he burnt down the Saviles' original home to prevent its being occupied by a Parliamentarian garrison during the Civil War, but was killed in action in 1644.

It was next inhabited by his son, the Marquess of Halifax, the Lord Privy Seal, who died in 1695. In 1679, he constructed a new north wing on the site of the abbey church, containing reception rooms and a long gallery. He also built the large stable block to the right of the house. The surviving service wing (currently used as offices) was also added by the Saviles in the 17th century.

When Henry died in 1881 it passed to his younger brother Augustus William Lumley-Savile (1829–1887) and then to his eldest brother, the diplomat John Lumley-Savile.

By the early 1900s, the Rufford Abbey Estate comprised some 18,500 acres (75 km2), but had begun to feel the effects of rising running costs and reduced incomes. In 1931 the estate descended to the 3rd Baron Savile, who was only 12 years old, and the trustees took the decision to sell the estate off in lots in 1938.

Sir Albert Ball bought much of the land, and quickly sold the house to the eccentric aristocrat Harry Clifton.

The Abbey and 150 acres of grounds were bought by Nottinghamshire County Council in 1952. In 1956 the late 17th century North and East wings were demolished and the remaining west West and South service wing put into the care of the Ministry of Works.

The site was opened to the public by Nottinghamshire County Council and is today one of the most visited attractions in North Nottinghamshire. Shops, catering, cars parks and events there are managed on behalf of the council by Parkwood Leisure.

The abbey was the setting for Helen Cresswell's children's book (1984) and later TV series called The Secret World of Polly Flint (1987). The small neighbouring village of Wellow was also used.

Go to the Rufford Abbey Country Park website for more...