It is managed by Nottinghamshire Wildlife Trust in partnership with the site's owners, Cemex (formerly RMC Group), supported by Broxtowe Borough Council. 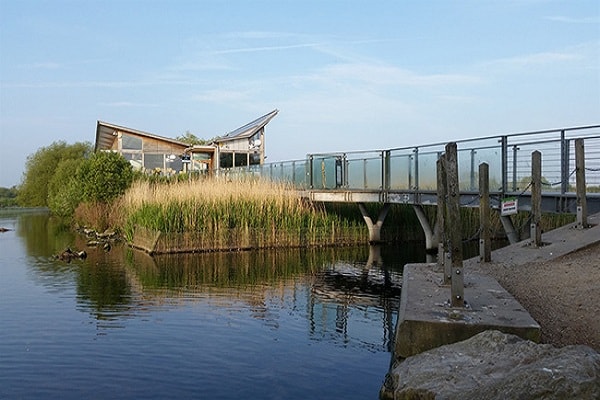 At its centre is a building called Attenborough Nature Centre comprising visitor services and educational facilities.

The site was used as gravel pits between 1929 and 1967. Working gravel barges still pass through the site.

As sections of the site are worked out they are restored as wetland. In 2010 an area known as Thrumpton's Land was restored in this way. The reserve was established at the completion of an earlier phase of workings, in 1966 and was opened by the naturalist and broadcaster David Attenborough.

The reserve now covers 145 hectares of lakes, wetland, grassland and scrub. It sits at the confluence of the River Erewash and the Trent.

It is part of an area designated as the Attenborough Gravel Pits Site of Special Scientific Interest (SSSI). The SSSI covers 226.6 hectares (560 acres) and extends westwards beyond the reserve, to the County Boundary.

There are large lakes formed by the flooded pits, known as Church Pond, Clifton Pond, Main Pond, Tween Pond and Beeston Pond, plus drier areas of scrub and grassland such as Corbetts Meadow and Erewash field. There are also areas of native willow and woodland.

The ponds have become the most important bird overwintering area in Nottinghamshire for shoveler and diving ducks.

The Attenborough Nature Centre at the site provides an educational facility, shop and refreshment point and car park for the reserve, accessed from Barton Lane, Attenborough. The Centre was completed in 2005, since which it has won a Gold award for eco-tourism.

Almost 40 years after he opened the reserve itself, Sir David Attenborough returned to open the centre. An article in BBC Wildlife Magazine listed it as number 9 in a top ten 'eco places in the world'.

The facilities are open seven days a week, and the centre is surrounded by the ponds. There are also two public bird hides.

Go to the Attenborough Nature Centre website for more...