The Workhouse, also known as Thurgarton Hundred Incorporated Workhouse and later Greet House, in the town of Southwell, Nottinghamshire, England, is a museum operated by the National Trust.

This National Trust property is not about grand architecture, aristocratic lineage, or magnificent art collections. Built in 1824, it was the prototype of the 19th-century workhouse, and was cited by the Royal Commission on the Poor Law as the best example among the existing workhouses, before the resulting New Poor Law of 1834 led to the construction of workhouses across the country. 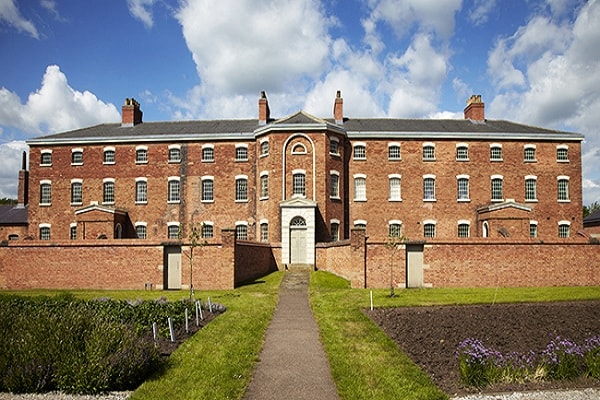 It was designed by William Adams Nicholson an architect of Southwell and Lincoln, together with the Revd. John T. Becher, a pioneer of workhouse and prison reform, who was interested in an austere system imposed on the poor for their moral good, which this building incorporates, and inspired those who drafted the Poor Law Amendment Act of 1834.

It is described by the National Trust as the best-preserved workhouse in England.

The building remained in use until the early 1990s, when it was used to provide temporary accommodation for mothers and children. Its acquisition by the National Trust in 1997 reflects that organisation's wish to broaden its interests and to ensure the continued existence of a Grade II* listed building that was potentially to be turned into residential flats.

With the aid of a £2.25 million grant from the Heritage Lottery Fund, restoration work began with roof repairs in 2000 and is ongoing. Many rooms have been redecorated as they would have looked in the 19th century and buildings, walls and privies, which had been demolished in the 20th century, have been reinstated.

In 2015 the property was featured in the four-part series “24 Hours in the Past”, in which six celebrities experienced what life was like in Victorian Britain.

A sole picture, on loan from nearby Southwell Minster, is a portrait by Thomas Barber of 'The Reverend John Thomas Becher (1770–1848)', who was interested in an austere system imposed on the poor for their moral good, which this building incorporates, and inspired those who drafted the Poor Law Amendment Act of 1834.