Clumber Park is a country park in the Dukeries near Worksop in Nottinghamshire, England. It was the seat of the Pelham-Clintons, Dukes of Newcastle which is owned by the National Trust and open to the public. The park is listed Grade I on the Register of Historic Parks and Gardens.

Mentioned in Domesday Book, Clumber was a monastic property in the Middle Ages.

It later came into the hands of the Holles family.

In 1709 it was enclosed as a deer park by John Holles - 1st Duke of Newcastle.

Clumber house, by the River Poulter at the centre of the park, became a hunting lodge.

Two generations later, about 1759, the heir to the estate, Lord Lincoln, decided to make it one of his principal mansions.

Over the next few years, work on the house and park proceeded, under the supervision of a carpenter and builder named Fuller White.

White was dismissed in 1767, and Wright took charge of the project, replacing some of the 1760s features in the 1770s. 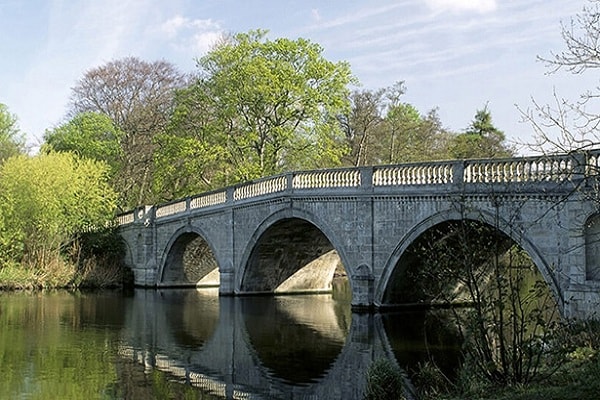 The project was still not complete when Wright died, and some features in and around the park may have been designed by his successor, John Simpson, in the 1780s.

In March 1879 a serious fire destroyed much of Clumber House and the 7th Duke of Newcastle had it rebuilt to designs by Charles Barry, Jr.

Another fire, in 1912, caused less damage, but the effects of the First World War and the Great Depression forced the abandonment of the mansion, which, like many other houses during this period, was demolished in 1938.

The Church of St Mary, a Grade I listed Gothic Reviva lchapel built by the 7th Duke of Newcastle and a four-acre walled kitchen garden with a glass house measuring some 450 feet in length survive.

The Duke's study, designed by Barry, is all that survives of the main house, it is presently home to the Clumber Café. It is listed Grade II on the National Heritage List for England.

Clumber Park is over 3,800 acres (15 km²) in extent, including woods, open heath and rolling farmland.

It contains the longest double avenue of lime trees in Europe. The avenue was created by the 5th Duke of Newcastle in the 19th century and extends for more than two miles (4km).

Clumber Lake is a serpentine lake covering 87 acres (352,000 m²), south of the site of Clumber House and extending 2 km to the east. The lake was partially rebuilt in the 1980s and again in 2004 after suffering from subsidence from coal mining.

Hardwick Village lies within the park, near the eastern end of the lake.

The park was left to the people of Worksop by the Duke of Newcastle and acquired by the National Trust in 1946.

Close to the main parking area is a cricket pitch with a thatched roof pavilion in the style of a cottage clad in rustic split logs.

Along the road side are large open areas to park and picnic.

The park is used by walkers and has several miles of paths and cycle tracks surrounding the lake. The park has bicycles for hire.

The visitor centre is in the old stable block, part of which houses a display on the history of the park, a shop and restaurant.

Off the main lime tree avenue are camping facilities.

The four-acre walled kitchen garden has a glasshouse 450 feet in length and contains Pelargoniums, grapevines and a Butia capitata palm. It was once heated by an underfloor heating system, fired by locally sourced coal, allowing exotic plants to be grown all year round. The pipework is in place beneath the ornate metal floor grates.

The garden is divided by pathways and contains vegetables, herbs, fruit, flowers and an ornate rose garden. The garden grows locally derived varieties such as the 'Clayworth Prize Pink' celery and more than 101 varieties of apple from the Nottinghamshire and East Midlands region including the 'Sisson's Worksop Newton' apple. The garden has large collection of rhubarb, numbering over 135 edible varieties.

The lower end of the garden is accessed by an iron gate to Cedar Avenue allowing colder air and moisture to move out of the garden avoiding the creation of frost pockets which could damage tender plants or reduce the growing season.

In 1981 an area of 526.59 hectares (1301.20 acres) was designated an SSSI. A wide variety of species-rich habitats surround the former mansion, including the lake and wetlands, grassland and heath, and mature deciduous woodland. The mature trees and dead and decaying ancient trees provide good habitats for beetles. There are breeding birds of woods and heath ncluding nightjars, woodlark, redstart, hawfinch, water rail and gadwall.

Ancient breeds of English Longhorn cattle and Jacob sheep have been introduced to pastures surrounding the lake as part of the process for managing the grassland habitats while safeguarding rare livestock breeds.