Heckington Windmill is the only eight-sailed tower windmill still standing in the United Kingdom with its sails intact. 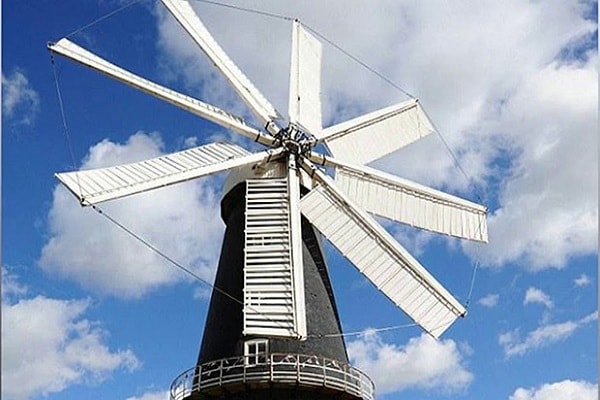 Heckington is located between Sleaford and Boston in Lincolnshire, England. The mill stands very close to Heckington railway station, hence its name of the Station Mill in the 19th century. The windmill is designated a Grade I listed building.

The mill was built in 1830, to plans by millwright Edward Ingledew, for the first owner and founder Michael Hare. The mill was constructed in red brick, the outer walls being tarred to keep moisture out, as a five-sailed windmill. The sails were Sutton's single patent design providing longitudinal shutters on both sides of the backs. The mill has six storeys called "floors": ground floor, meal floor, stone (stage) floor, lower bin floor, upper bin floor (hoist floor), dust or cap floor.

Originally the five-armed sail-cross drove three pairs of stones and milled grain for a 60-year period of time. But Hare died in April 1834, and the mill owner's widow, Ann Hare, was left with a young son (James b. 1831). She remarried a local miller Sleightholme Nash in about 1836.

The mill eventually passed to Joseph Nash (Sleightholme Nash's son by an earlier marriage) who became its last miller before it became inoperable in 1890 as a result of damage during a storm. The destruction of the fantail by lightning allowed a tail-wind to make the sails run backwards, leaving the cap rotating uncontrollably which blew the entire cap off. The curb was smashed together with parts of the upper gear and all the five sails, and the tower rim was destroyed. Nash abandoned the wrecked mill.

In 1891 John Pocklington of Wyberton Mill bought the eight-sailed mill cap and gear from the 78-year-old defunct Tuxford's Mill.

He then bought the wrecked Heckington Mill, and, from 1891 until early 1892, he fitted the white onion-shaped fantail-driven Tuxford's Mill cap to the Heckington Mill and set it working for the following 54 years.

Later he installed a large circular saw-mill in a shed on one side, also driven by wind-power using line-shafts. It was used to make elm boards for coffins.

John Pocklington became very successful in milling, baking, building, sawing, and farming. In that time and even up to today the mill was also called the Pocklington's Mill.

After Pocklington's death in 1941 the mill stopped working in 1946 for the next 40 years. The shutters (also known as "shades") were removed from the sails.

In 1953 the mill came into the hands of Kesteven County Council who made the first restorations preventing the fine old mill from being dismantled and restoring it as a rare landmark.

Only four of the eight sails could be installed, which came from the Old Bolingbroke and Wainfleet St Mary Mills.

The mill changed hands to Lincolnshire County Council and in 1986 the mill was finally restored to working order, the repairs included the construction of 192 new shades and four new sails sustained by the "Friends of Heckington Mill", with the new sails cross weighing five tons.

Due to the large sail area, of its eight sails and the favourable winds of the location, the mill is able to drive four pairs of millstones; now 2 pairs of French (quartzite) stones and 2 pairs of so-called Peak stones (Derbyshire sandstone) and is able to work in very light breezes, where other local mills cannot.

Now the distinctive eight-sails windmill is run by the Heckington Mill Trust and was reopened in 1986. In 2004 the mill underwent a larger restoration and in 2014 the sails were replaced.