Belvoir Castle (pronounced “beaver”) is a stately home in the English county of Leicestershire, overlooking the Vale of Belvoir. It is a Grade I listed building. A corner of the castle is still used as the family home of the Manners family and remains the seat of the Dukes of Rutland, most of whom are buried in the grounds of the mausoleum there.

The castle remains privately owned and is open to visitors. 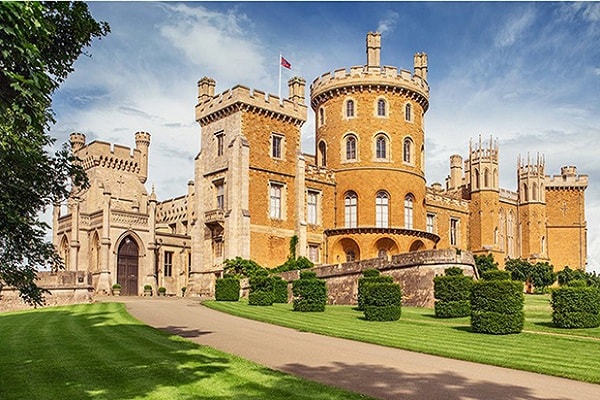 The first castle was a Norman castle which originally stood on the high ground within the wapentake of Framland, overlooking the adjacent wapentake of Winnibriggs in Lincolnshire and dominating both. It was built on the land of Robert de Todeni of the Doomsday Book, and inherited from him by William d'Aubigny. It then eventually passed to William's granddaughter Isabel, who married Robert de Ros circa 1234.

Belvoir was a royal manor until it was granted to Robert de Ros in 1257. He was given a licence to crenellate in 1267. When that family died out in 1508, the manor and castle passed to George Manners, who inherited the castle and barony through his mother. His son was created Earl of Rutland in 1525.

The Norman castle had been in ruins since 1464 and John Manners, 9th Earl of Rutland, started construction of a second castle from 1528. Much of the stone for this building came from Croxton Abbey and Belvoir Priory following their dissolution.

During the English Civil War, it was one of the more notable strongholds of the king's supporters and King Charles spent a night here on his way into Lincolnshire.

In 1649 the castle was destroyed by Parliamentarians. A third building was started in 1654 which was designed as a large family home. It was designed by the architect John Webb and work was completed by 1668.

The 9th Earl was created Duke of Rutland in 1703. Belvoir castle has been the home of the Manners family for five hundred years and seat of the Dukes of Rutland for over three centuries.

The castle was rebuilt a forth time in the romantic Gothic Revival style to designs by James Wyatt between 1799 and 1816, but on 26 October 1816 it was almost destroyed by a fire. The loss included pictures by Titian, Rubens, Van Dyck and Reynolds.

It was rebuilt again to largely the same designs, by the wife of the 5th Duke and was largely completed by 1832. The result is a building which bears a superficial resemblance to a medieval castle, its central tower reminiscent of Windsor Castle.

The castle contains many works of art. The Queen's Royal Lancers Regimental Museum of the 17th and 21st Lancers was established here in 1964, but was required to leave in October 2007.

The highlights of the tour are the lavish staterooms, the most famous being the Elizabeth Saloon (named after the wife of the 5th Duke), the Regents Gallery and the Roman inspired State Dining Room.

Several films and television programmes have used it as a location:

The castle itself was used as a location for The Da Vinci Code — it represented Castel Gandolfo, the Pope's summer residence.

In September 2007, it was used as a location for The Young Victoria.

In the 2001 Jim Henson production of Jack and the Beanstalk: The Real Story, the castle is where the giant bones have been discovered.

The kitchen scenes of Hill House were filmed here for the 1999 version of The Haunting which is a remake of the 1963 version.

The castle was used as one of several stand-ins for Buckingham Palace for the 1991 comedy film King Ralph.

Other notable events which have happened or occur regularly at the castle include:

Belvoir Castle is the host of Belvoir Fireworks, an annual pyrotechnic and firework competition that takes place in mid-August.

In August 2010, the castle's website was mistakenly hacked and taken over by an Algerian group who blanked the pages and inserted anti-Semitic texts in Arabic. The hackers had mistaken Belvoir Castle for Belvoir Fortress, which is located in Israel.

Briery Wood Heronry is a biological Site of Special Scientific Interest in the grounds.

Belvoir Castle was used as a stand-in for Windsor Castle in the second series of British television series The Crown.