Newark Castle, in Newark, in the English county of Nottinghamshire was founded in the mid 12th century by Alexander, Bishop of Lincoln. Originally a timber castle, it was rebuilt in stone towards the end of the century.

Dismantled in the 17th century after the English Civil War, the castle was restored in the 19th century, first by Anthony Salvin in the 1840s and then by the corporation of Newark who bought the site in 1889. 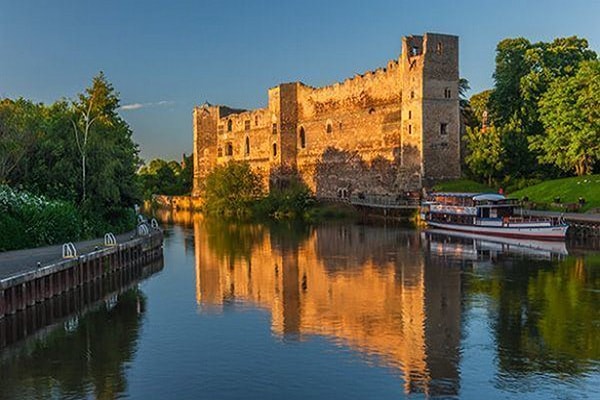 The Gilstrap Heritage Centre is a free-admission museum in the castle grounds about the history of the town of Newark.

In a charter generally thought to date to 1135, King Henry I granted the Bishop of Lincoln permission to build a castle. The charter reads:

“Henry, King of England to all the Barons and to the Sheriffs and to his ministers and faithful men of Nottinghamshire, Greeting. Know ye, that I have granted to Alexander, Bishop of Lincoln, that he may make a ditch and rampart of his fishpond of Niwerc upon the Fosseway and he may divert the Fosseway through the same town as he shall wish.”

Alexander also established a mint at the castle.

This early castle was most likely of timber construction, and was rebuilt in stone towards the end of the century. King John died after a feast at this castle on the night of 18 October 1216 from dysentery.

The castle was slighted (the deliberate destruction, partial or complete, of a fortification without opposition, to render it unusable as a fortress) in 1648 and left derelict. Between 1845 and 1848 architect Anthony Salvin restored the castle, and in 1889 the corporation of Newark purchased the building and carried out further restoration work.

The castle is a Scheduled Ancient Monument, a "nationally important" historic building and archaeological site which has been given protection against unauthorised change. It is also a Grade I listed building (first listed in 1950) and recognised as an internationally important structure.

The Gilstrap Heritage Centre is located on the castle grounds. The centre features exhibits about the castle, and the town's history during the English Civil Wars. The Gilstrap Centre is now the Newark Registration Office.

Admission to the gardens is free. Tours are conducted by the Castle Ranger, bookable through the T.I.C. or Ranger's Office.

Go to the Newark Castle and Gardens website for more...