Mr Straw's House is a National Trust property in Worksop, Nottinghamshire, United Kingdom. The Edwardian semi-detached house and its contents have remained largely unchanged since the 1920s. It opened to the public in 1993.

The Edwardian semi-detached house, built in 1905 and located on Blyth Grove in Worksop, was the residence of the Straw family. William Straw ran a lucrative grocery and seed company. He had two children, Walter and William Jr., with wife Florence, the daughter of a well-off butcher.

They moved from the flat above the shop into the house in 1923, naming it "Endcliffe Villa". Florence quickly got to work on the decoration of her new house. 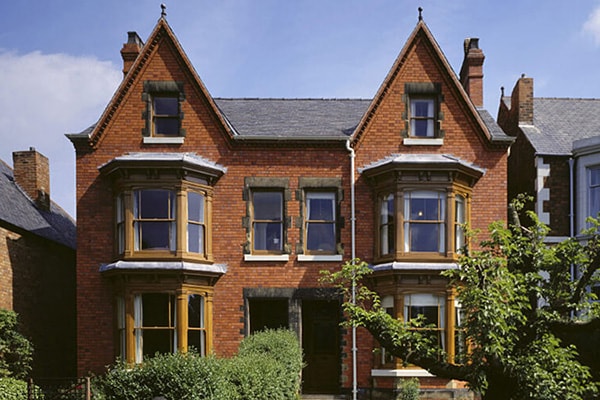 The period features include patterned carpets, thick curtains, and dark, heavy wallpapers that were popular at the time. Oil paintings housed in gilt-frames adorn the walls, though none of the items found in the house are classed as being valuable or particularly rare.

William died suddenly in 1932 while gardening. The family, grieving the loss, decided to preserve the house and avoided all forms of modernisation. William's tobacco pouch and pipe, hanging beside the fireplace, was untouched, and the 1932 calendar was left on the wall.

William Jr., who had moved to London to become an English teacher around 1918, returned to the house in 1938, the year before his mother's death.

He and brother Walter continued to run the house without making any changes, resisting modern conveniences. Walter died in 1976, and William Jr. lived in the house until 1985, when he was hospitalised after a fall.

The family had always owned the adjoining property, which they rented out. After William Jr.’s hospitalisation the tenants became the caretakers of the Straws' house, and after William Jr.’s death in 1990 inherited both properties. William had left in his will the entire contents of Endcliffe Villa to the National Trust, but they didn't know what to with the unusual bequest, until the Straws' former tenants (now the owners of the properties) gave both properties to the National Trust. They are believed then to have gone travelling.

So the National Trust were now the owners of their first semi-detached house, in a tired and very much untouched state. Initial assessments of the property quickly revealed the historical preservation that had occurred over the years.

Conservators were required to repair sections of wallpaper damaged by damp and touch up sections of the woodwork. The house opened to the public in 1993.

The family threw very little away and lived without many modern conveniences.Brothers William Jr. and Walter were determined to maintain the original feeling of the house. It is believed that a lightbulb once fell from the chandelier into William Jr.'s lunch and he refused to replace it. The empty socket therefore remained.

The adjoining property now contains the ticket desk, shop and museum rooms which contain some of the family’s belongings. The display includes William Jr.'s Scout uniform and teacher's gown, as well as early photographs and Victorian furniture and household objects.

Many of the items remain exactly where the Straw family left them in drawers etc. Over 12,500 individual items have been catalogued and photographed ranging from tea measures to a two-person Baby Daisy vacuum cleaner from the 1910s.

The property has been described as "the nearest thing to a time capsule that the National Trust has ever received and "a unique glimpse into family life in suburban Britain between the wars".

Go to the Mr Straw's House website for more...