It was the faith of two US presidents and several prominent UK industrialists, yet the origins of the Quaker religion are little known today by people living in the English town where it began. However, a new heritage trail targeting the American tourist market is aiming to change that.

In 1647, George Fox, a cobbler, was walking past a church in the East Midlands when he received what he described as a message from God.

The son of a Leicestershire church warden, he had spent years wandering around an England torn apart by civil war and increasingly disaffected with the establishment church.

The vision of Christianity he received outside the church in Mansfield, Nottinghamshire, was deeply radical - God was within everyone and there was no need for priests.

Within a few years, he was preaching to large crowds - and provoking the persecution of the authorities who felt threatened by his anti-priesthood agenda. 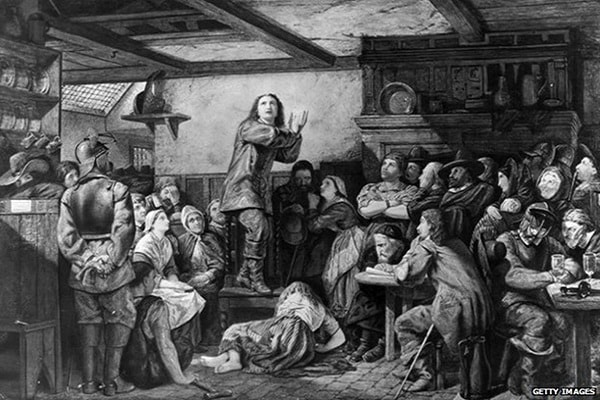 Fox convinced thousands of people to join the Quakers in the 17th Century.

He was once put in the stocks in the nearby village of Mansfield Woodhouse for standing up and attempting to speak during a church service - something only clergy were supposed to do.

One of many dissenting religions popular in England at the time, Quakerism spread around the British Isles. In subsequent decades, as religious dissenters fled persecution by emigrating to the American colonies, the faith spread to the other side of the Atlantic Ocean where it remains strong today.

There are currently some 400,000 adherents worldwide. US presidents Richard Nixon and Herbert Hoover were both Quakers, while UK chocolate manufacturers Cadbury's was founded by a Quaker family.

Fox himself is remembered with a memorial in his birthplace of Fenny Drayton, Leicestershire, and a tombstone in Islington, north London, where he died in 1691. However, until now, there was nothing in Mansfield to mark the birth of the religion he founded.

Now the county council plans to expose the county's "best kept secret" with the unveiling of a plaque and a heritage trail around the town.

Laura Simpson, of the county council's tourism department, hopes the trail will attract visitors from around the world, particularly American tourists, to Nottinghamshire.

So why is so little known about the Quakers in Mansfield? Perhaps one reason is the town's first meeting house, where Quakers met to worship, was demolished in the 1970s to make way for a road.

In recent years a headstone was put up in the cemetery - the only reminder of Mansfield's Quaker heritage.

The heritage trail and audio tour starts at the recently-built bus station, which now stands on the site, and a plaque will be unveiled, listing the names of the Quakers who were once buried there.

The trail continues to Quaker almshouses, built in 1691 for the poor, to the church outside which Fox received his calling, the Catholic church which stands on the site of his home and the current Mansfield Friends Meeting House.

It also includes the Metal Box Factory's clock tower - a symbol of Quakerism's links to the business world. The factory made tin containers and was founded and run by three prominent local Quaker families until it closed.

Another reason why Mansfield's Quaker heritage is little known is that Quakers are "reticent" to shout about their religion, according to Anne van Staveren, media officer for Quakers in Britain.

Time will tell if the Mansfield trail attracts international visitors in the numbers the council hopes. But, given the Quakers' commitment to equality, it is unlikely Fox would approve of the celebrity status it may give him.

Go to the Mansfield Quakers Heritage Trail website for more...