Nottingham Castle is a castle in Nottingham, England. It is located in a commanding position on a natural promontory known as "Castle Rock", with cliffs 130 feet (40 m) high to the south and west. The Castle is owned by Nottingham City Council.

The first Norman castle was a wooden structure and of a motte-and-bailey design, and was built in 1067, the year after the Battle of Hastings, on the orders of William the Conqueror.

This wooden structure was replaced by a far more defensible stone castle during the reign of King Henry II, and was imposing and of a complex architectural design, which eventually comprised an upper bailey, a middle bailey which contained the main royal apartments, and a large outer bailey. 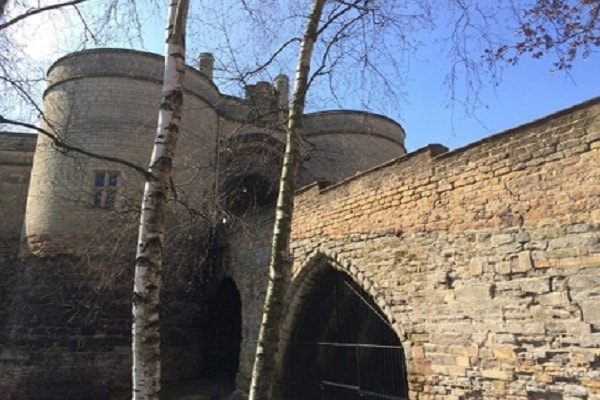 For centuries the castle served as one of the most important in England for nobles and royalty alike. It was in a strategic position due to its location near a crossing of the River Trent, it was close to the royal hunting grounds at Tideswell and also the royal forests of Barnsdale and Sherwood Forest. The castle also had its own deer park in the area, which is still known as The Park.

While King Richard I of England (known as "Lionheart") was away on the Third Crusade, along with a great number of English noblemen, Nottingham Castle was occupied by supporters of Prince John, including the Sheriff of Nottingham. In the legends of Robin Hood, Nottingham Castle is the scene of the final showdown between the Sheriff and the hero outlaw.

In March 1194, an historic battle took place at Nottingham castle, part of the returned King Richard's campaign to put down the rebellion of Prince John. The castle was the site of a decisive attack when King Richard besieged the castle, after constructing some of the same types of siege machines he had used on the crusade. The castle surrendered after just a few days.

Shortly before his 18th birthday, King Edward III, with the help of a few trusted companions led by Sir William Montagu, staged a coup d'état at Nottingham Castle (19 October 1330) against his mother Isabella of France, and her lover, Roger Mortimer. Both were acting as Regents during Edward's minority following their murder of his father Edward II at Berkeley Castle. William Montagu and his companions entered a secret tunnel and overpowered Mortimer who was arrested, along with Queen Mother Isabella, and sent to the Tower of London and hanged a month later.

Edward III used the castle as a residence and held Parliaments.

In 1346 King David II of Scotland was held prisoner. Edward improved the castle In 1365 with a new tower on the west side of the Middle Bailey and a new prison under the High Tower.

The state council was held in the castle In 1387 and again by Richard II to humble Londoners.

From 1403 until 1437 it was the main residence of Henry IV's queen, Joan, after which maintenance was reduced. Only during the Wars of the Roses did Nottingham Castle begin to be used again as a military stronghold.

Edward IV proclaimed himself king in Nottingham, and in 1476 he ordered the construction of a new tower and Royal Apartments.

During the reign of King Henry VII the castle remained a royal fortress.

Henry VIII ordered new tapestries for the castle before he visited Nottingham in August 1511. By 1536 Henry had the castle reinforced and its garrison increased from a few dozen men to a few hundred.

In 1538 the Constable, the Thomas Manners, 1st Earl of Rutland, reported on the need for maintenance and the castle ceased to be a royal residence by 1600 and was largely rendered obsolete in the 16th century by artillery.

At the start of the Civil War, in August 1642, Charles I chose Nottingham as the rallying point for his armies, but soon after he departed, the castle rock was made defensible and held by the parliamentarians, they repulsed several Royalist attacks, and they were the last group to hold the castle.

After the execution of Charles I in 1649, the castle was razed to prevent it being used again.

After the restoration of Charles II in 1660, the present 'Ducal Mansion' was built by Henry Cavendish between 1674 and 1679 on the foundations of the previous structure. some rock cut cellars and medieval pointed arches survive beneath the mansion, together with a long passage to the bottom of the rock, commonly known as Mortimer's Hole, through which guided tours take place, starting at the Castle and ending at Brewhouse Yard.

The Duke's mansion is a rare surviving example in England of Artisan Mannerist architecturebut , it lost its appeal to the later Dukes with the coming of the Industrial Revolution. During a riot in 1831, in protest against the Duke of Newcastle's opposition to the Reform Act 1832, the rioters burned down the mansion.

The mansion remained a derelict shell until it was restored in 1875 and opened in 1878 by the Prince of Wales, (later King Edward VII) as Nottingham Castle Museum,[6] the first municipal art gallery in the UK outside London was accommodated a top-lit picture gallery modelled after the Grand Gallery of the Louvre.

The gatehouse of the medieval castle and much of the walling of the outer bailey was retained as a garden wall for the Ducal mansion. Most of the stonework of the outer fortifications which is now visible dates from an Edwardian reconstruction.

On Christmas Day 1996 a landslip revealed some remains of the original castle foundations and the bedrock and the terrace was reinstated in 2005 with a traditional stone façade with the medieval masonry to remaininf accessible to visitors. The terrace appeared in the film Saturday Night and Sunday Morning, a groundbreaking film about the changing attitude of youth in a changing industrial society during the late 1950s.

The ducal mansion is still in use as a museum and art gallery. It houses most of the City of Nottingham's fine and decorative art collections, galleries on the history and archaeology of Nottingham and the surrounding areas, and the regimental museum of the Sherwood Foresters.

Go to the Nottingham Castle and Art Gallery website for more...