As well as International cricket and Nottinghamshire's home games, the ground has hosted the Finals Day of the Twenty20 Cup twice. In 2009 the ground was used for the ICC World Twenty20 and hosted the semi-final between South Africa and Pakistan. 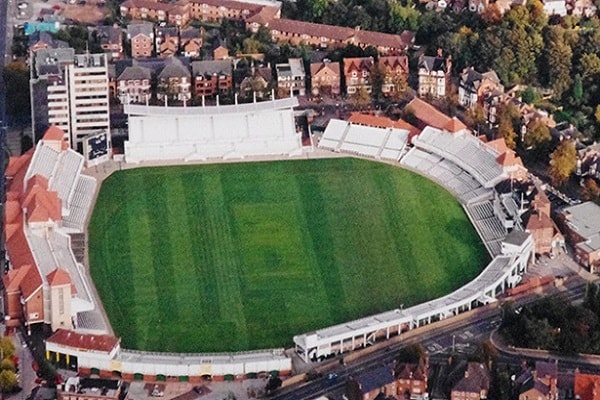 The site takes its name from the nearby main bridge over the Trent, and is also close to Meadow Lane and the City Ground, the football stadia of Notts County and Nottingham Forest respectively.

Trent Bridge was first used as a cricket ground in the 1830s. The first recorded cricket match was held on an area of ground behind the Trent Bridge Inn in 1838. Trent Bridge hosted its first Test match in 1899, for England playing against Australia.

The ground was first opened in 1841 by William Clarke, husband of the proprietress of the Trent Bridge Inn and himself Captain of the All England Cricket Team. He was commemorated in 1990 by the opening of the new William Clarke Stand which incorporates the Rushcliffe Suite.

Trent Bridge is considered to be one of the best grounds in the world to watch cricket. Trent Bridge's pavilion, kept within the architectural parameters of its 1889 foundation, is thought of as one of the most renowned trademarks of cricket because it faces the wicket at an angle.

Recent developments include the £7.2 million Radcliffe Road Cricket Centre, opened in 1998 and the state of the art £1.9 million Fox Road stand, which has received awards for its architectural excellence. The latter includes a modernistic aircraft-wing roof and was opened in 2002.

Commencing in 2007, Trent Bridge has undergone redevelopment with the construction of a new stand to replace the Parr Stand and West Wing and the addition of one to five rows of extra seating at the front of several of the other stands. This increased capacity from 15,358 to 17,500, and the work was completed in time for the 2008 Test match against New Zealand. The stand was officially opened on 5 June by Prince Philip. After being called the "New Stand" for a number of years, it was renamed as the Smith Cooper Stand in March 2016.

Bowling takes place from the Pavilion End and the Radcliffe Road End, with the wickets laid square of the Fox Road, William Clarke and Smith Cooper stands.

In Test matches held at Trent Bridge, the highest team total is 658 for 8 declared, scored by England against Australia in 1938.

The lowest team total is 60, scored by Australia against England in 2015, and Stuart Broad also took 8-15 for England against Australia during the same match, in just one innings, as he did not bowl in the second innings.

Denis Compton scored 278 against Pakistan in 1954.

In 2013, Ashton Agar achieved the highest test score by a no. 11 batsman whilst on debut for Australia.

Go to the Trent Bridge Cricket Ground website for more...