Grantham Museum is located at St Peter's Hill, Grantham, Lincolnshire, England in the building provided for it in 1926.

The building also housed the public library, and was partly funded by the Carnegie UK Trust which was continuing Andrew Carnegie's project of building libraries across the United Kingdom. Grantham's library is now located in the Isaac Newton Centre, and the museum occupies the whole of the 1926 building. 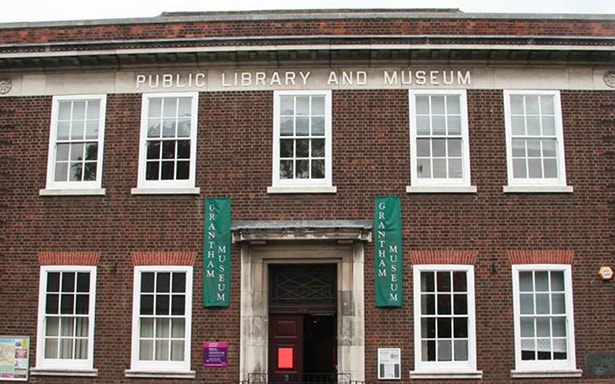 The idea of a museum can be traced back to meetings of the Grantham Scientific society in the 1890s.

The basis of the collection is material provided by Henry Preston, the first Curator and Founder, and 20th century additions included material about Sir Isaac Newton, Edith Smith and Margaret Thatcher. There is also material about the Dambusters Raid. The Museum hosts a variety of exhibitions during the year.

The museum is currently managed by the Grantham Community Heritage Association (GCHA), which was formed by a group of local volunteers in 2011 to take over the management of the museum after it was forced to close in 2011 after Lincolnshire County Council pulled its funding with a view to reopening the facility for the Queen's Jubilee in June 2012.

The Museum was close for 3 months of refurbishment in 2015 and the many improvements include:

New lighting, removing a partition wall and taking the carpet up to reveal the original parquet flooring.

New exhibits include a mock-up of a World War One trench.

Helen Goral, the museum's chairman, said: "The museum has come such a long way in the past two years and this refurbishment is the culmination of a lot of hard work. Everyone involved, particularly our volunteers, have been instrumental in making this happen and we couldn't have done it without them."

Christine Robbins, exhibitions director, said a lot of work had gone into improving the look of the space since the charity took over. "We've got a state of the art lighting system; it's both brighter and safer for the exhibits," she said. "[We found] beautiful teak flooring and most of the big old houses in Grantham have exactly the same. Obviously the same company laid it in 1927."

The museum also has a World War One display including a display of sweetheart pincushions that the local school children and adults have created. Cushions of this type were sent to loved ones during the conflict, Ms Robbins said.

The museum was officially reopened by Grantham's mayor Ian Selby.