Holme Pierrepont Country Park, home of The National Water Sports Centre is located in Holme Pierrepont near Nottingham, England and on the River Trent. It is used for many different types of sports and has recently received significant investment which has enabled a major refurbishment of existing facilities as well as introduction of new facilities.

Run by Serco on behalf Nottinghamshire County Council, it was previously one of five National Sports Centres, and is a unique sporting venue set in the centre of the country.

Set in 270 acres (1.1 km2) of parkland, Holme Pierrepont Country Park not only offers a host of water activities, but also a range of land based activities. The centre is made up of three distinct pieces of water:

A water ski lagoon equipped with ski jump as well as a ski cableway.

Further, the River Trent is also accessible from the site. 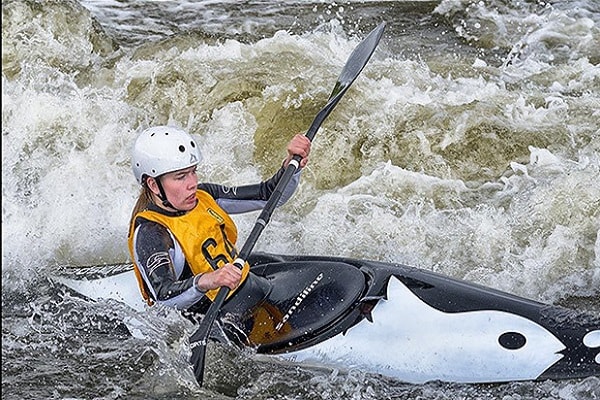 Holme Pierrepont Country Park also has an Outdoor Adventure Park, formerly known as the Family Fun Park, located in the Country Park area of the site. Opened in 2014, which includes:

Gym - There are two new gyms which were opened in 2014 - these include a 60 station Life Fitness gym which overlooks the Regatta Lake and a specific Strength and Conditioning gym. Equipment includes:

Accommodation - The site has 54 refurbished en-suite bedrooms in the main Lakeside building, as well as a self-contained cottage called The Elms, which sleeps up to 11 people. The site also has an 18-acre campsite containing a mixture of grass and hard standing pitches, some available with electric hook up, 5 Tipi's (introduced in 2016) and 10 Camping Arches (insulated wooden huts for camping in).

Conferencing Facilities - The centre offers conference and meeting facilities and has four refurbished conference rooms, with the largest room catering for up to 150 people.

Courses - The facilities provide a full range of award courses in:

A sports science and medicine centre, ran by the English Institute of Sport, is purpose built and is available for use by governing bodies for physiology, sports injury/rehabilitation and physiological testing.

Whitewater course - The course is a focal point for English whitewater rafting and kayaking, often holding international events for slalom, freestyle and wild water racing. One hosted event is the National Student Rodeo, the largest freestyle kayaking event in the world. During this event the Centre received coverage in local news, and publications such as Canoe & Kayak UK magazine.

The whitewater course is located between the weir on the canalised River Trent and the regatta lake.

Built in 1986, the course is made primarily from concrete. It is approximately 1500 metres long, drops just over 4 metres in height to produce Grade 3 whitewater rapids. The course is gravity fed, does not use electricity to power it, and therefore is relatively cheap to run.

Due to the nature of the design, swimming through the course is safer than many other locations around the UK due to deep channels and few significant underwater obstructions.

The amount of water flowing through the course depends on rainfall, and canal usage, but due to the large catchment of the Trent, flows between 16 and 25 cubic metres per second are common. The course is more likely to close due to too much water (in the winter), rather than too little. The course had a refit in 2009. Along with essential maintenance, some of the original concrete obstacles were removed and Omniflots (large plastic movable blocks) were added.

Sports - Holme Pierrepont Country Park, home of The National Water Sports Centre, is home of British Canoeing, the national governing body for canoeing and kayaking in the UK, whose headquarters are at the site.

One of the main sports held at the centre is rowing, using the 2000 metre multi-lane rowing lake. The Centre was the venue for the World Rowing Junior Championships in 1973, and for the World Rowing Championships in 1975 and 1986, and many major competitions for UK rowing. Typically the safety is outsourced to local lifeguard unit Colwick Park Lifeguards who have been part of the team at Holme Pierrepont since 1979.

The centre is also the venue for many Triathlon events, including the Outlaw Half and Full Triathlons. The full triathlon sees over 1100 athletes from all over the world taking on a 2.4 mile swim, 112 mile bike ride and 26.2 mile run.

The centre is the base for the Holme Pierrepont Running Club.

The centre was chosen to host the Sea Scout 100 national Sea Scout Centenary Jamboree in August 2009. Over 3000 Sea Scouts attended including the USA and New Zealand.

Go to the Holme Pierrepont Country Park website for more...