Nottingham Industrial Museum is situated in part of the 17th-century stables block of Wollaton Hall, located in a suburb of the city of Nottingham. The museum won the Nottinghamshire Heritage Site of the Year Award 2012, a local accolade issued by Experience Nottinghamshire, an organisation funded variously by Nottingham City Council, Nottinghamshire County Council and other sources.

The Museum collection is open at weekends and bank holidays. 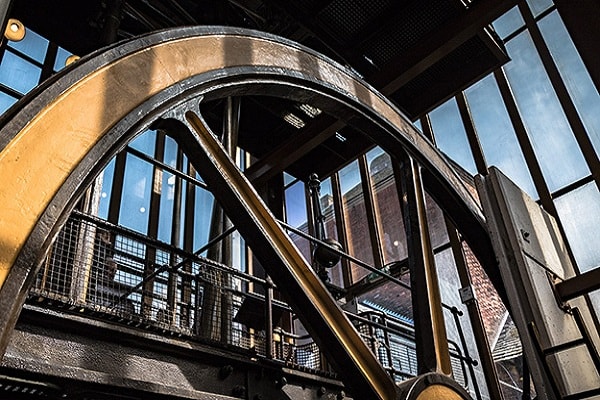 The museum contains a display of local textiles machinery, transport, telecommunications, mining and engineering technology. There is a display of cycles, motorcycles and motor cars and examples of significant lace-making machinery.

It houses an operational Beam Engine, from the Basford pumping station.

A stocking frame knitting machine designed and developed in 1589 by William Lee (inventor), that enabled the manufacture of large volumes of stocking hoses.

In 1808 John Heathcoat developed a hand operated machine which marked the beginning of the local lace industry though he later moved to Tiverton, Devon.

The galleries here show stocking frames, a 1910 Warp knitting machine, a Wilman Circular, an Old Loughborough Bobbinet, a 1910 Heathcoat, a Leavers machine and a Barmen.

In 2018, one of the lace machines was returned to operational condition for the first time in over 50 years.

There is a small collection of restored Raleigh bicycles and Brough Superior motorbikes (including George Brough's own trails motorcycle, made in Sheffield) TE Lawrence was an enthusiast and was killed riding one of the eight he owned.

Outside is displayed a large wooden Gin Wheel. This horse gin was removed from a colliery in Pinxton where it had been used for bringing coal to the surface up until 1950.

In the gin yard is a coal truck from Clifton Colliery from the days when this mine was providing most of the coal for the nearby Wilford Power Station which was situated on the site of what is now the Riverside Retail Park.

Nearby is situated the recently restored living van. These were towed behind steam engines and steam rollers and provided accommodation for workers and their families whilst working on farms or road works. There are usually a number of tractors to be found in the tractor. The tractor collection comprises a Standard Fordson and a Field Marshall Series 2.

Outside the engine house is a yard which is home to a number of barn engines, used previously to drive items like pumps and agricultural machinery. There are examples from manufacturers such as Wolseley.

The Steam Gallery contains an impressive Basford Beam Engine, one of a pair of engines built in 1858 by R. W. Hawthorn in Newcastle upon Tyne. It was installed at Basford Pumping Station to lift water 110 ft from the sandstone below to supply fresh water to the City of Nottingham. The engine was replaced in 1965 and was removed to the purpose-built Steam Gallery where it was first fired in 1975.

Also in this building today are a large variety of pumps and engines many of which were removed from local companies.

At the bottom end of the gallery stand two impressive ploughing engines. These have consecutive registration numbers and were the last two production engines to come out of Fowlers Leeds Foundry. Owned by Nottingham City Council, they were used for ploughing the treated sewage into the land at a large dairy farm at Stoke Bardolph.

Next to the ploughing engines is a unique J. T. Marshall Portable steam engine, built at the Nottingham Engineering Works, Sandiacre, in 1886.

An operational model railway can also be seen in the steam hall along with a working model of a Robey stationary engine. In a separate room there is a very large stationary mill engine that was previously housed in a Nottinghamshire pub before being rescued by the museum. Behind the mill engine lies a display of model stationary and railway engines.

Many of the exhibits are in working order and can be seen operating on steaming days.

Go to the Nottingham Industrial Museum website for more...