The Cathedral Church of St. Barnabas in the city of Nottingham, England, is a cathedral of the Roman Catholic church. It is the mother church of the Diocese of Nottingham and seat of the Bishop of Nottingham.

It is located on the corner of Derby Road and North Circus Street, on the opposite side of which are the Albert Hall and the Nottingham Playhouse (Wellington Circus). 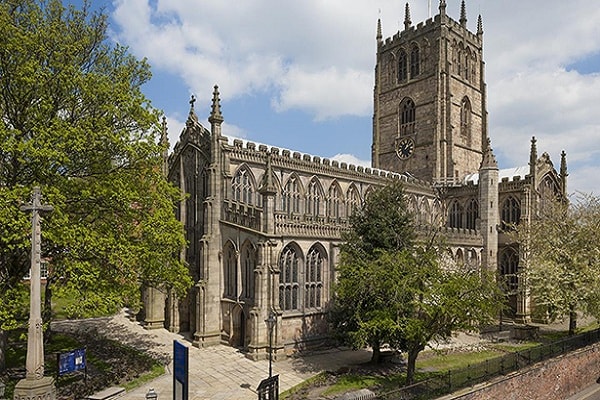 A substantial amount of the cost was paid by the important Catholic Lord Shrewsbury. The architect was Augustus Welby Northmore Pugin who also designed the interior of The Houses of Parliament.

It was built in the Early English Plain Gothic style, although in contrast, the Blessed Sacrament Chapel was richly decorated and Pugin’s later churches were built in that Decorated Gothic style throughout.

Pugin was retained as architect by Rev Robert William Willson, then priest in charge of Nottingham. In 1842 he was named as Bishop-Elect of Hobart, Tasmania, and had to leave the work in Nottingham before completion.

The cathedral is a Grade II* listed building of the lancet style of architecture, and is considered to be one of the best specimens of Pugin's work.

The clergy of the Cathedral also serve the church of St. Augustine on Woodborough Road.

The Cathedral's choral scholarships are available to students above or of eighteen years of age who are in full-time tertiary education in the Nottingham area.