The Grantham Canal is a canal that runs for 33 miles (53 km) from Grantham, falling through 18 locks to West Bridgford where it joins the River Trent. It was built primarily to allow for the transportation of coal to Grantham. It opened in 1797, and its profitability steadily increased until 1841. It was then sold to a railway company, after which it declined, and was finally closed in 1936. 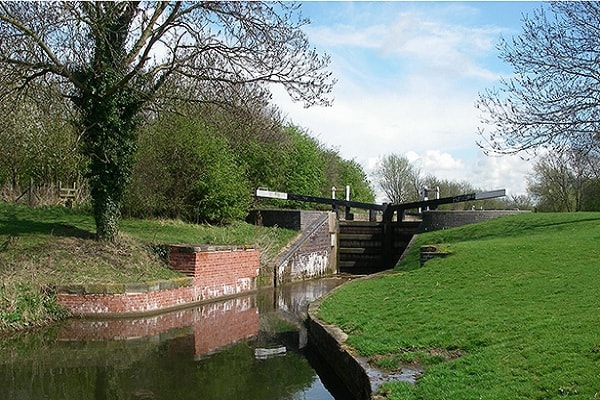 Because it was used as a water supply for agriculture, most of the channel remained in water, although bridges were lowered. Since the 1970s, the Grantham Canal Society have been working towards its restoration, and two stretches are navigable to small vessels. Full restoration will require a new route where the canal joins the Trent, as road building has effectively severed the original route.

The concept of a canal from the River Trent to Grantham was first raised on 27 August 1791, as a way of supplying the district with cheaper coal. A final route was developed, with the junction at West Bridgford. The act of Parliament received the Royal Assent on 30 April 1793.

Building work on the canal started in 1793. The act authorised an initial £105,000 to be raised to pay for construction. However, this amount proved insufficient. A second act was sought, and Royal assent was received on 3 March 1797 for an additional £24,000 to be raised.

The eastern section from the Leicestershire border was opened on 1 February 1797, with the rest of the canal later that year. The canal was built with locks the same size as those on the Nottingham Canal to allow boats to use both.

18 locks raised the level of the canal by 140 feet (43 m) from the Trent to Grantham. Eleven of them located above the Trent, and a flight of seven locks at Woolsthorpe.

The canal made sufficient money to repay substantial debts in 1804 and 1805. Traffic towards Grantham included coal and coke, lime, groceries and building materials. Downward traffic was largely agricultural produce, including corn, beans, malt and wool.

In common with most canals, competition from railways posed a major threat, and in 1845 the canal owners agreed to sell it to the Ambergate, Nottingham, Boston and Eastern Junction Railway.

Traffic declined as the railway companies neglected the canal, and in 1936 it was formally closed. The closure act stipulated that the water level be maintained at 2 feet to support agricultural needs. This effectively guaranteed the continued existence of the canal channel, but in the 1950s 46 of the 69 bridges over the canal were lowered as part of road improvement schemes. Although the low bridges act as barriers to navigation, large parts of the canal are still in water.

In 1963 control of the canal passed to British Waterways. Under the terms of the Transport Act 1968 the Grantham Canal was listed as a remainder waterway which meant maintenance would only be carried out where failure to do so would create health or safety issues.

In 1970, the British Waterways Board came up with a plan to fill in a section of the canal in Nottingham and to try obtaining an act of parliament which would have allowed them to cease maintaining the water levels of the canal. The Inland Waterways Association campaigned against the bill, and the clause was amended. The Grantham Canal Society was formed soon afterwards, to promote restoration of the waterway.

Together with British Waterways, the Inland Waterways Association and the Waterway Recovery Group, the Society began the work of restoration of the canal to navigation, a process which is still ongoing.

So far the restoration works carried out include:

In 1992 the removal of an old railway embankment, which blocked the route near the top of the Woolsthorpe flight of locks.

New gates were fitted to the top three locks at Woolsthorpe.

The rebuilding of Casthorpe bridge opening up 4.4 miles (7.1 km) of the canal for navigation.

Further down the canal, restoration of a 2.3-mile (3.7 km) section between Hickling Basin and Hose in 1993.

The rebuilding of locks 6 and 7, completed in 2000, brought the number of locks restored to five, and approximately one quarter of the canal has been restored to navigable standard.

Much improvement of the towpath has also taken place, and access to it is possible at most of the bridges.

A major setback occurred in 2007, when one of the walls of Woolsthorpe top lock had to be propped to prevent it collapsing and the wall was demolished and has been rebuilt in three sections, utilizing 290 cubic yards (220 m3) of concrete and 7,500 new bricks.

Restoration of a dry section of the canal near Cropwell Bishop does not present major problems, but challenges are presented by the final sections at both ends. The original route to join the Trent has been severed by the building of the A52 road. An alternative route possibly being the course of the Polser Brook, which passes under the A52. At Grantham, an embankment carrying the A1 road blocks the line of the canal, and the terminal basin has been filled in. There are plans for a tunnel under the A1 as part of a cycle route to improve access to Grantham, and the basin could be redeveloped in due course.

There is also a 5-mile (8 km) dry section between Cotgrave and Kinoulton, which has presented problems since construction in the 18th century where gypsum in the soil reacted with the waterproof clay leading to leaking.

A 10-mile (16-km) section from the A1 to Redmile will be completed once the bottom four locks of the flight are restored.

The canal and its banks between Redmile and Harby is designated a biological Site of Special Scientific Interest as Grantham Canal SSSI.