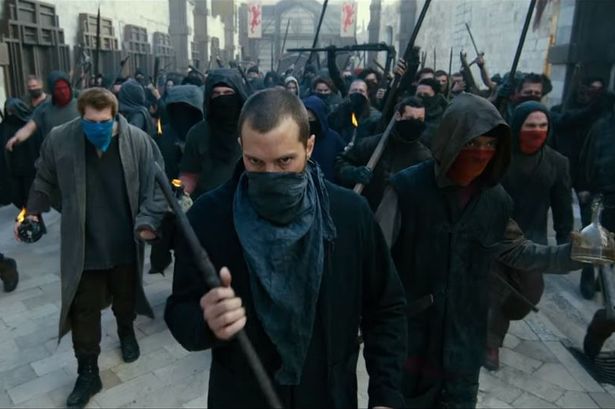 The first trailer for the new Robin Hood film which comes out this autumn has been released – and it looks like it’s going to be a very different take on the legendary heroic outlaw of Nottingham.

This new film about the legendary heroic Nottingham outlaw is titled ‘Robin Hood’ and Otto Nottinghamurst is the director, known previously for Peaky Blinders and Black Mirror.

The trailer, released by Lionsgate Movies, hints at the romantic relationship between Robin and Marian. It features Taron Egerton as Robin  jumping off buildings, riding horses and swinging on ropes.

The Kingsman star can also be seen stealing bags of gold and starting fires for this latest big screen version of the legend.

In the film mystery surrounds the identity of the hooded vigilante, he has a bounty on his head and can be taken dead or alive.

He describes the unknown man as “a smash-and-grabber and nothing more”. His identity is eventually revealed when he pulls back his hood later in the trailer and he is indeed Robin Hood.

The film was filmed in locations including Dubrovnik (Image: Lionsgate Movies)

With the outlaws looking more like a marauding street gang than a group of Sherwood Forest pals. Featuring plenty of Matrix-style slo-mo action shots. The film is much removed from the more traditional versions starring Kevin Costner and Russell Crowe.

Jamie Foxx appears as Little John, Jamie Dornan as Will Scarlet and Ben Mendelsohn as the Sheriff of Nottingham.

The film charts Robin Hood’s return from The Crusades when he comes back to discover a Sherwood Forest rife with corruption and evil.

Shooting of the film took place in a variety of European locations including Dubrovnik. The set builders had to recreate the home of Nottingham’s legendary outlaw 1,500 miles away from Nottingham.

November 23 will be the UK cinema release date. The date of November 21 given in the trailer is incorrect.